The Amarillo community is brimming with generous volunteers, influential leaders and successful businesspeople. The people of Amarillo are what make our city unlike any other. With the AEDC guest blog posts, we hope to educate readers on our community as well as share valuable messages from Amarillo's key thinkers. This is a guest post by David Terry, Executive Director of the WT Enterprise Center.

In 1995, as a senior business student at WT, I heard Don Taylor speak at an event on campus. Don had written his best-selling book, Up Against the Walmarts, which immediately thrust him into the category of sought after professional speaker and small business guru.

That day, Don Taylor inspired me. He challenged me to think entrepreneurially and to acquire entrepreneurial skills. Don ignited a spark that kindled a burning passion within me. In the years to come, through his vision and leadership, we would create something that continues to inspire innovation still today – the WT Enterprise Center. 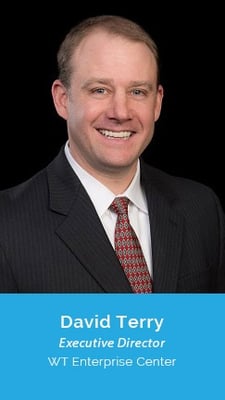 To me, Don was larger than life; he was a celebrity, yet so very approachable and helpful. Although I didn’t know Don personally, I knew Don’s wife, Sue Taylor, as an instructor at WT. She was instrumental in helping me acquire several scholarships that paid for my school.

I knew Don from his Sunday column, Minding Your Own Business, prominently featured each week on the front page of the business section of the Amarillo Globe-News. I read the column every week and often clipped the column for future reference. Don had such a practical approach to business and life that connected businesspeople across the country.

Fast forward three years to 1998… Don was Director of the Small Business Development Center and I was working as a financial consultant for NationsBanc Investments. One day, to my surprise, Don called me. He said, “David, I am looking for a hungry young tiger to help me counsel small business owners. Everyone says I need to talk to you.”

Completely excited, I responded with several questions about the position and we agreed to meet to discuss further. I went to his office at 1800 South Washington at 6 p.m. We met for more than three hours and connected on every level. I went to work with Don on April 20, 1998.

That first year, I did more than 100 seminars and advocacy speeches in the community and all over the Panhandle region. With Don’s influence, inspiration and support, I had found my calling to help people.

Don Taylor was a visionary. We worked with hundreds of business owners in the Small Business Development Center. We noticed, however, that there was a select group of entrepreneurs that were growth oriented – selling products and services outside of the area and differentiating themselves from other local retail and service businesses.

In 1999, we separated from the SBDC and formed the Office of Business Services to work with these “primary” businesses. The Office of Business Services contracted with the Amarillo EDC to administer the Amarillo EnterPrize Challenge, and we also contracted with Texas Cooperative Extension, now AgriLife Extension, to provide economic development training throughout the Panhandle region. We helped rural leaders “find entrepreneurial capital” in their communities.

In 2000, State Representative David Swinford, Chairman of the House Agriculture Committee, led Texas Community Future Forums across the rural areas of the State of Texas. Mr. Swinford listened to constituencies with similar problems of the “brain drain” of young people leaving rural areas, dependence on low-value commodities, and lack of industry diversification.

With our contract with Texas Cooperative Extension, Dr. Bob Robinson, District Director for the Panhandle district, connected Mr. Swinford with Don Taylor. Don envisioned a place, a business incubator, that would become the world headquarters for startup and early stage businesses in Amarillo and the Texas Panhandle region.

We researched other incubators around the country and put a proposal together for state funding based on Don’s grand vision. In September 2001, the State of Texas appropriated $1.5 million to West Texas A&M University for the creation of the Rural Agricultural Business Incubator and Accelerator, now known as the WT Enterprise Center.

Don was a leader. He believed in me, and he taught me; he let me fail, and he supported me. He equipped me to carry out his vision.

Sue tells me that Don considered me the son he never had. I’m deeply humbled by that statement. In November 2006 Don passed away after a long battle with cancer.

On July 22, 2016, we will officially celebrate our 15-year anniversary as a business incubator in Amarillo. If there was a theme for business incubation, it’s flexibility.

In 15 years as a university-based startup, we have embraced 10 phases of construction and four business model changes. We were recently awarded the coveted Dinah Adkins Incubator of the Year award from the International Business Innovation Association.

We have worked with 56 companies through incubation services that, last year, supported 762 primary jobs and more than $38 million in annual payroll. Those companies generate $129 million in sales annually and have acquired more than $10 million in investment from equity and community banks.

At the core, though, we simply help people… We help people build great companies. We help people strive for excellence. We have fun, and each day, we hold true to Don’s vision and leadership as we seek to inspire innovation in Texas Panhandle entrepreneurs.

David Terry, a professional business coach and entrepreneur, is the Executive Director and co-founder of the WT Enterprise Center. He earned his MBA from WTAMU and acquired his Associate Certified Coach Credential from the International Coach Federation. Connect with David on LinkedIn.