"Work For It, Because No One Is Going To Give It To You"

The Amarillo EDC and the West Texas A&M Enterprise Center is sending eight local entrepreneurs to represent our thriving business community at the INC. 5000 Conference & Gala in San Antonio in October. Each of the attendees has offered to contribute a blog about their experiences as an entrepreneur working in the Texas Panhandle. This is a guest post by Jacob Moreno,‎ co-founder of Altura Engineering & Design.

As I think back to my adolescent years and try to figure out why I wanted to be an entrepreneur, there are two people that come to mind. One is my dad, “Jimmy” Casimero Moreno, and the other is a group of people, the migrant workers I spent my summers with.


We often look back and wonder how it is that we find ourselves in the positions we’re in, but in my case, I know exactly what drove me to start my own business. It was the lessons that my father and the migrant workers taught me. 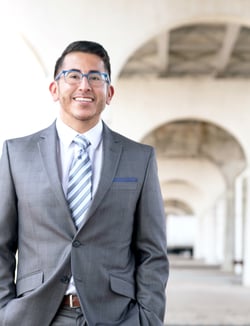 The first lesson I learned was hard work pays off. My dad left school during his eighth grade year. He left because his dad passed away, and, as the oldest son, he had to become the head of the household. As he got older, he became a field contractor. This was his first real entrepreneurial experience. He would gather the migrant workers and find farmers that needed help with their crops and make deals on how much it would cost to maintain them. This could be removing weeds, planting, or picking onions.


We did this for a few summers but as crops changed, and chemicals were improved to help maintain weeds, this work eventually died out. As it was dying out, my dad decided to go into used car sales. He ventured out and opened his first car dealership and called it Moreno Motors.


This is what amazes me most about my dad, a man that only went to the eighth grade, could open a used car dealership and sale hundreds of cars throughout its lifetime; his wife, my mom, only went to the second grade.

The next lesson I learned was from the migrant workers. In fact, there are a couple lessons I learned from them. Take pride in what you do and take care of the people around you.


These families would travel for miles to work the crops for a summer for minimal pay just to take care of their families. When I say families, I mean fathers, mothers, sons, daughters, sons-in-law, daughters-in-law, and grandchildren. They always traveled together and when it was time to collect their wages, they were shared as a family. These may not be family businesses, but each person was given their fair share of wages. It was never one person trying to stuff their pockets more than another, but if they were to survive, they had to do it together, as a family.


These families would work from sun up to sun down to make ends meet. They worked hard, no matter what they were doing. They took pride in doing a good job. You never had to worry about them being late or not showing up. You could count on them showing up and to show up with a smile. I think back to those times and I can still picture some of the older ladies offering me lunch or a soda. While we ate lunch under a truck to escape the blistering sun, I can still hear the older men teaching their grandkids how to plant onions or pick onions as if was a privilege to get the chance to do it. And, at end of the day, I could see their smiles as we rode in the back of that old truck while heading to the next field to start the process all over again.


My dad never had the chance to see me as a co-founder of Altura Engineering & Design and the migrant workers would probably only remember me a Jimmy’s son, but the lessons I learned from them will last a lifetime and God willing, generations to come.

Jacob Moreno is the co-founder and partner of Altura Engineering & Design, which specializes in piping and mechanical design projects. He has nearly 15 years of design and construction experience.