There's change in the air, and the energy coming from Texas isn't just coming from the Texas Tea that made the state famous. These days, more and more companies are turning their attention to the sky and power of the wind that is blowing across the Texas Panhandle.

There are more than 40 different wind power manufacturing facilities in the state. These generate roughly 17,700 megawatts of power that satisfies nearly 9% of the total electricity used in Texas, the equivalent of 4.1 million homes. In December 2015, wind energy generated in Texas provided 45% of the state’s total electricity needs at 13.8 gigawatts of electric power, an all-time high for the state. Nationally, Texas produces more wind power than any other state, and Amarillo is working to support the industry and drive these numbers even higher.

Last year, the AEDC secured a deal with Spanish based Gestamp Renewable Industries to build wind towers for the wind energy industry at the CenterPort Business Park. The company is currently constructing a $41 million plant that, at full capacity, will add 300 jobs to the local economy. In addition to creating jobs in the region, these wind towers will be installed in Texas and other states where they will be paired with the latest technologies to generate long-term, renewable energy in addition to stable employment for the thousands of workers who will install and maintain the machines.

Gestamp is not alone in seeking to become part of the new energy boom happening in the region. Cielo Texas Transmission has a wind farm just outside of Vega that has more than 70 turbines installed and in operation. In December, Cross Texas Transmission began work on a $900 million project in nearby Panhandle that will install 108 Siemens turbines in the state. These projects are connected to multiple wind farms located just outside of Amarillo in Potter and Randall counties. 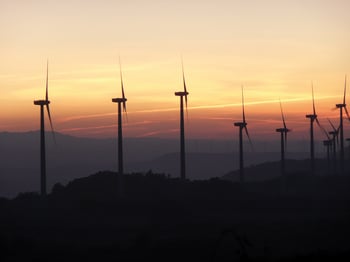 With all of the new wind turbines reaching into the sky like the oil derricks of the past, the biggest problem Texas faces isn't the amount of energy our turbines can create; it is the fact that the state's transmission lines are struggling to keep up with the supply of power.

With the passing of the first Renewable Energy Standard in 1999, Texas has dedicated and invested more than $7 billion into infrastructure development to establish the Competitive Renewable Energy Zone (CREZ) to connect the Class 4 wind systems of the Panhandle to the metropolitan hubs further down state with a robust electric transmission system.

These new turbines and renewable energy products mean more than 24,000 jobs across the state, and more opportunities for businesses eager to take advantage of the region's declining utility costs. The growth of wind power in the state means stable employment for linemen, engineers, welders, technicians, and office workers. Since the wind will never stop blowing and the technology continues to unlock new efficiencies, these projects will position the Amarillo region as the state's leading supplier of wind power for many years to come.

We invite you to contact the Amarillo Economic Development Corporation for more information. We will happily tell you more about the ways we are working to make Amarillo a hub of wind power technology and to create a brighter future for businesses and residents in the region.

See how Amarillo has grown and flourished over the past 20 years!