The Reality Of "Dream, Girl's" Message

As a working mom with three children, I log on to Pinterest a lot. Not necessarily because I am crafty, but more because I am insanely busy.

The quote struck me because I was just coming off of an incredible week as part of the planning committee for the Dream, Girl film screening we held in Amarillo as part of Global Entrepreneurship Week. 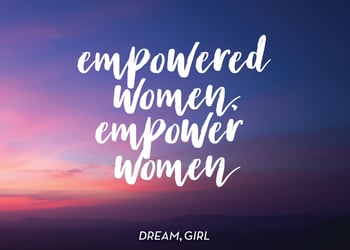 For the past four to five months, I’ve been working closely as part of a small but driven team of Amarillo business women to bring this incredible message to our community.


Prior to this project, I didn’t know these women very well. I knew them from Chamber meetings or other events, but we’d never worked closely together.

And anyone who has ever been to business school and worked on a team-based project or served on a committee for a major event knows that real bonds are formed when you are deciding ticket prices, discussing brunch agendas and determining what color to make the T-shirts.


All joking aside, in the months of planning that went into this event, we all grew. We grew as individuals, professionals and as friends. At lunch meetings, we’d share about grown babies heading off to college or a heartbreaking medical diagnosis before our salads were served.


We’d wrap up dessert by thanking each other for the hard work, brilliant ideas and extra effort someone had contributed earlier that week. Over coffee, we’d hold each other’s babies and smile at the progress we were making as the greater community began to share in our excitement for the film.


But the first time the planning committee watched the film together in the small offices at the West Texas Enterprise Center, we were silent. As the credits rolled and the music wrapped up the movie, we sat so still and just looked at one another in the quiet of that Friday afternoon.

The Dream, Girl message had struck home for each one of us; it had struck us differently and similarly in the same moment.

It was a message that we wanted the community that we were all raising a family in needed to hear as well. And in that moment I was thankful.


I was thankful I lived in an era where people like Erin Bagwell were making powerful films to tell important stories about women chasing their dreams.


I was thankful I had a job with an organization that supported the message of Dream, Girl and was willing to work to bring the message to the City.


I was thankful I was in a room of women, mostly working moms, who felt so strongly about the message of Dream, Girl that we were willing to do whatever it took to get an audience in Amarillo to sign up to watch and listen.

I was thankful for the opportunity to take my 8-year-old daughter to see the film so that she could keep dreaming about opening her pastry shop in Paris.


Because, at least for me, the message of the Dream, Girl film isn’t just about women entrepreneurs. It isn’t about feminism or girl power. It isn’t even necessarily about business.


To me, the film is about doing what it takes to make your dreams a reality. It’s about forming relationships with people, with mentors, that can support you and push you to be the best version of yourself.


It’s about accepting that struggle is part of what makes the journey feel so sweet at the end.


It’s about discovering your individual strengths and finding a unique way of showcasing them to the rest of the world.


It’s about remembering that your dreams don’t care if you are 28, 48 or 78 — just that you keep going until your dream becomes your reality.


The late night Dream, Girl planning is over. But those planning committee girls do feel more like family. And those dreams of mine do feel a little closer to reality. And for that, I am truly thankful.