The Power Of Partnerships: Famous Collaborations Throughout History

You’ve heard the old saying, “two minds are better than one.” Throughout history, that adage has mostly held true, especially when it comes to some of our world’s most notable partnerships.

When I envision successful partnerships, one of the first duos that pops into my mind is Paul McCartney and John Lennon. The story about how they met as teenagers — diametrically different with different personalities and different skills — only accentuates why they were such great collaborators and artists. They knew how to complement one another. Lennon once said that he knew the minute he met McCartney, he realized Paul was a much better musician and performer. But he also knew that while he was a bit intimidated by Paul’s talents, he knew that bringing Paul into the band would make him a better musician. 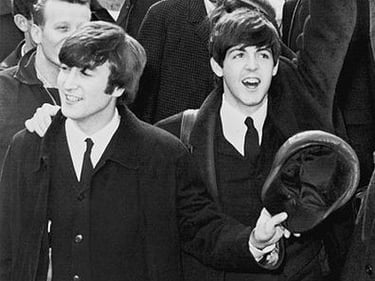 And isn’t that the case with so many famous partnerships? Two people or organizations come together and build off of one another to create something amazing — they create their legacy.

After researching some of the more famous partnerships in history, I became intrigued by how these relationships were born.

Take these two brothers-in-law, William and James. Both men were immigrants and both were entrepreneurs. William was a candlemaker and James a soapmaker, both living in Ohio.

Eventually, the two men married a pair of sisters, the Norris sisters. Their father-in-law, Alexander Norris, noticed that both men competed for the same materials to make their products. So, as all good fathers-in-law do, he encouraged the men to work together as a single company to get a better deal for their materials and, ultimately, make more money to support his daughters. The two men listened to the wise counsel of dear ol’ dad and William Procter and James Gamble established what we today know as Procter & Gamble.

Then there’s Bill and Dave. In the 1930s, both men were studying engineering at Stanford University. Both men loved electronics, but beyond that, they shared an avid passion for the outdoors. After graduation, the two friends took a two-week camping and fishing vacation. The bond the two friends forged lasted past graduation and past their early career days.

Eventually, the friends found wives and made their way back to Palo Alto, California, where they took the advice of one of their Stanford professors and started their own company in a small garage. With just over $500 in capital and their wives as their first employees, Bill and Dave flipped a coin to come up with the name of their company. Bill Hewlett won. And today, the garage he and Dave Packard started — today known as Hewlett Packard — is considered the birthplace of Silicon Valley.

And those are just a few of the most notable partnerships that caught my eye during my night reading about centuries of amazing pairs that conceived the world’s most magnificent legacies.

In reading the biographies and listening to the interviews, each co-founder or partner always credited the company’s success — or in the case of the Beatles, the band’s success — to the relationship and strengths brought by their partners.

And that is ultimately what I realized is the power of partnerships. They take a person’s or organization’s individual strengths and provide a catalyst to create legacies that influence people, businesses or cultures for decades.

When I started my job at the Amarillo EDC two years ago, I knew the basics of what the EDC did. I understood that the general mission of the company was to expand the economy by recruiting new business to the area to create jobs and diversify the economy. Basically, I read the mission statement. And I bought in. I knew the EDC’s role was vital and I knew its contribution to the health of the city was critical.

It was a few months into the job that I realized that what we did and what our mission instructed us to do as an EDC was hugely dependent upon other organizations in the community. The infrastructure prospective companies were seeking was dependent upon our local government making the right investments over the course of decades. We needed a forward-thinking local utility that understood corporate and residential needs for reliable and cost-efficient energy.

Companies were also looking for a talented and educated workforce. And yes, while we have outstanding community colleges and universities in the area, our school district had focused on making investments into not only reading our kiddos for college but focusing on ultimately developing great employees.

And then there are the non-profits and entrepreneurs, the small business owners and the creatives that were receiving funding and support to add to the critical element of a quality of life that businesses seek out for their employees. It was — and is — a huge network of partners working to make a better community.

Late last summer, I started working on a new branding campaign for Amarillo and I thought about the story of how Bell Helicopter returned to Amarillo. Here’s a brief backstory:

In the late 1990s, when Bell was searching for a location to assemble the V-22 Osprey, it received offers from more than 1,200 communities vying for the opportunity to host this well-known, reputable company.

Thankfully for Amarillo, Bell had resided in our fair city previously during the 1960s and '70s, and was familiar with what our community offered. But by 1997, when the company’s search was at its peak, Amarillo now had a secret weapon in its arsenal: the AEDC.

The EDC offered a hugely compelling piece for Bell in that our organization could offer a great recruitment package to Bell, including land and incentives. But one of the other key pieces the EDC could present was the partnership our organization had established with Amarillo College.

Bell knew it needed an expansive piece of land and a talented team of mechanics who were experienced in advanced manufacturing, tooling and welding. Bell also knew it needed tremendous help not only recruiting a sound workforce, but also properly training these employees to build these impressive birds.

With the help of the EDC and Amarillo College, Bell was able to construct a custom training program, known today as the BETA program, that would allow the company to curate its ideal workforce: hard-working, well-trained and efficient employees who were proud of the product they produced.

This is the perfect example of a fruitful local partnership that has impacted, and continues to impact, our community. Successful partnerships are not produced out of thin air, but are rather built, fostered and invested in over a period of time. And just like the partnerships of McCartney and Lennon, Procter and Gamble, and Hewlett and Packard, the partnership between Amarillo College, the Amarillo EDC and Bell Helicopter has formed an impressive legacy.

The legacy I am referring to is not the V-22, the 525 or even the V-280. Yes, these helicopters are superlatively amazing and I am still determined to figure out a way to ride in one of them.

While it may not be quite as catchy, this partnership is our very own version of “Hey Jude,” because it’s a success. And that’s the true mission of the Amarillo EDC: to help develop lasting partnerships that grow our community and overall, make Amarillo a better place to work and live.

Interested in learning more about how the Amarillo EDC works to form successful partnerships and create legacies? Contact us today.