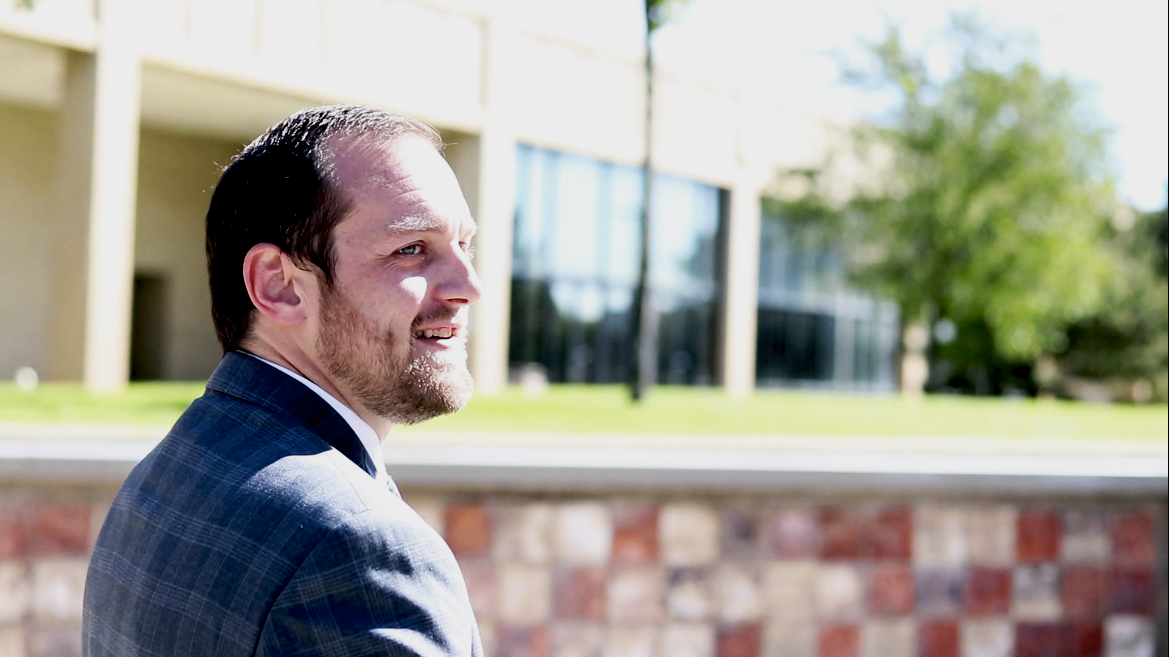 Millennial Jesse Patton is the Communications Coordinator for the City of Amarillo. He was born in Corpus Christi, but his family moved to Amarillo when he was six months old. Since then, he has become a part of the community and now considers Amarillo his true home.

Patton has a passion for his family and the arts. A graduate of River Road High School, he is currently finishing a degree at West Texas A&M University. He hopes to use his degree and expertise to help the Amarillo community work together to improve the local art scene and create more opportunities for young artists.

Reagan Hales: How would you define the spirit of Amarillo?

Jesse Patton: We have this mentality of doing things together, and you don’t see that in a lot of other areas. Whether you have children or you don’t, whether you’re old or you’re young, you have things to enjoy. Saturday nights are never boring as long as you look.

Hales: What success have you experienced in Amarillo?

Patton: There are opportunities wherever you might be. I have worked everything from my current position as Communications Coordinator with the City to manual labor and contract cleaning labor.

There is always an opportunity to make yourself better, to help your family succeed, and there's plenty of people willing to serve as mentors and offer advice. In Amarillo, we are all this close-knit community that wants everyone to succeed.

Hales: When you aren’t working, what do you like to do?

Patton: I love to play golf; I love to take my son to parks to get him involved in the community, but it’s really the fine arts community that I'm really passionate about. And listening to music, watching ballet, participating in art exhibits. Engaging in the community is something that I’m bettering myself at, and it’s available right here.

Hales: What are you most excited about for Amarillo’s future?

Patton: The growth we have right now across all sectors of the city. Whether that be the North Heights neighborhood with their neighborhood plan, the ballpark downtown, the new shops and stores opening, or creating new facades along I-40.

We still have that togetherness as we learn and keep things that are old but add things that are new. I don’t know what all “the new” is going to be, but it’s all going to come together and be that regional hub for the Panhandle.

Hales: What’s your favorite thing about the Panhandle?

Patton: It’s not just Amarillo whenever you're talking about the people that might be in our city limits. We have people from Pampa, Dumas, Canyon — people from all over the Texas Panhandle. Those people have this, “I’m-going-to-help-you-because-I-can” attitude. It’s never a negative experience to meet someone new in this area.

Hales: How do you hope to make an impact in your community?

Patton: The city of Amarillo has a lot of information to share, and that’s what it boils down to. Whether it’s a closed street that you’re going to have to find a detour around to get to work, or if it’s someone that needs help with renting assistance or community development block grant, we have a lot of information. How I hope to make an impact is sharing that information with the public.

Hales: What has been your proudest moment so far?

Patton: It comes in two parts. One is the birth of my son. I was extremely proud.

But about two-and-a-half years later, we were in a store. He had a choice between a lightsaber toy and a car toy. And he picked the lightsaber. I’m taking pictures, and I’m so proud that I’m raising a little mini-nerd me.

Help us continue to support millennials who make an impact on the Amarillo community every day. Nominate an influential millennial to be featured in our Millennial Campaign by sending them the link below.