The Amarillo EDC and the West Texas A&M Enterprise Center is sending eight local entrepreneurs to represent our thriving business community at the INC. 5000 Conference & Gala in San Antonio in October. Each of the attendees has offered to contribute a blog about their experiences as an entrepreneur working in the Texas Panhandle. This is a guest post by Kyla Frye,‎ Marketing Communications Director - ‎West Texas A&M University Enterprise Center.

Growing up in Amarillo, there was always a stigma about staying here upon graduation or returning after college. Maybe every town goes through this, but I felt that it was said too often and continues to resonate in the minds of Amarillo’s youth.

For me, it was to the point that I almost felt like a failure upon graduating from high school because I wasn’t going off anywhere; I was just attending Amarillo College because my mom worked there. However, starting at Amarillo College was one of the best things that happened to me. I met so many people who became my cheerleaders and supporters, and who led me to opportunities I never would have dreamed of before. 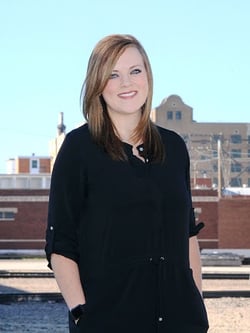 The president of Amarillo College at the time, Dr. Paul Matney, took a group of students to Austin during a legislative session to advocate on behalf of community colleges. During the trip, he gave us a tour of his alma mater, The University of Texas at Austin.


As a child, I always assumed UT was unattainable, but Dr. Matney told me otherwise and wrote me a letter of recommendation with my application. A couple of months later, I was accepted, and at that moment I realized I was capable of chasing my dreams.


Life happened, and leaving UT was a tough decision I ended up making. I came home to West Texas A&M University, and again, I returned to the stigma of “just going to WT” and “just being in Amarillo.”


A few weeks into my first semester at WT, I had another moment of realization: WT was a fantastic school with an abundance of opportunities. It had been sitting in my backyard this entire time! I didn’t need Austin to chase my dreams; I could do that from my hometown.


Fortunately for us, and for our youth today, I think that notion is catching on, as is the notion of “just staying in Amarillo” is changing.


I know many young professionals in a variety of industries who are talented, smart and enthusiastic about the growth of our hometown.


Why do we love our hometown so much? It has grown with us, but it has always remained a great place to raise a family. It’s also a wonderful place to start and grow a business.


Amarillo has a variety of resources and organizations to help entrepreneurs be successful. Not every city can say that. Amarillo, as a community, has rallied behind the idea of growing our own and creating a place that our talented youth want to remain.


The partnerships that have developed over the years to support a healthy business ecosystem is so unique to outsiders. They can’t believe how supportive community banks are of local entrepreneurs. They don’t understand how we have organizations like the Amarillo Economic Development Corporation who give $500,000 in grants every year to local businesses for growth.


Amarillo is home to one of the top business incubators in the world, the WT Enterprise Center, which has received multiple international awards. Amarillo also has one of the top Chambers of Commerce in the nation; the Amarillo Chamber of Commerce has won awards for best social media. All of these organizations and more come together to provide a variety of resources to empower business owners and professionals.


Starting or growing a business in Amarillo doesn’t have to be a struggle or an endeavor you take on alone. We often call Amarillo the biggest small town in Texas, and I couldn’t agree more.


We take care of our own; we develop relationships like a small town but we also strive to keep up with the times and develop new opportunities for growth like a big city.


I am excited to be one of the participants attending the Inc. 5000 Conference in San Antonio this month. Not only do we get to represent Amarillo and show them the successful companies we have helped, but we also have the opportunity to highlight Amarillo as one of the best places in the world to grow a business.