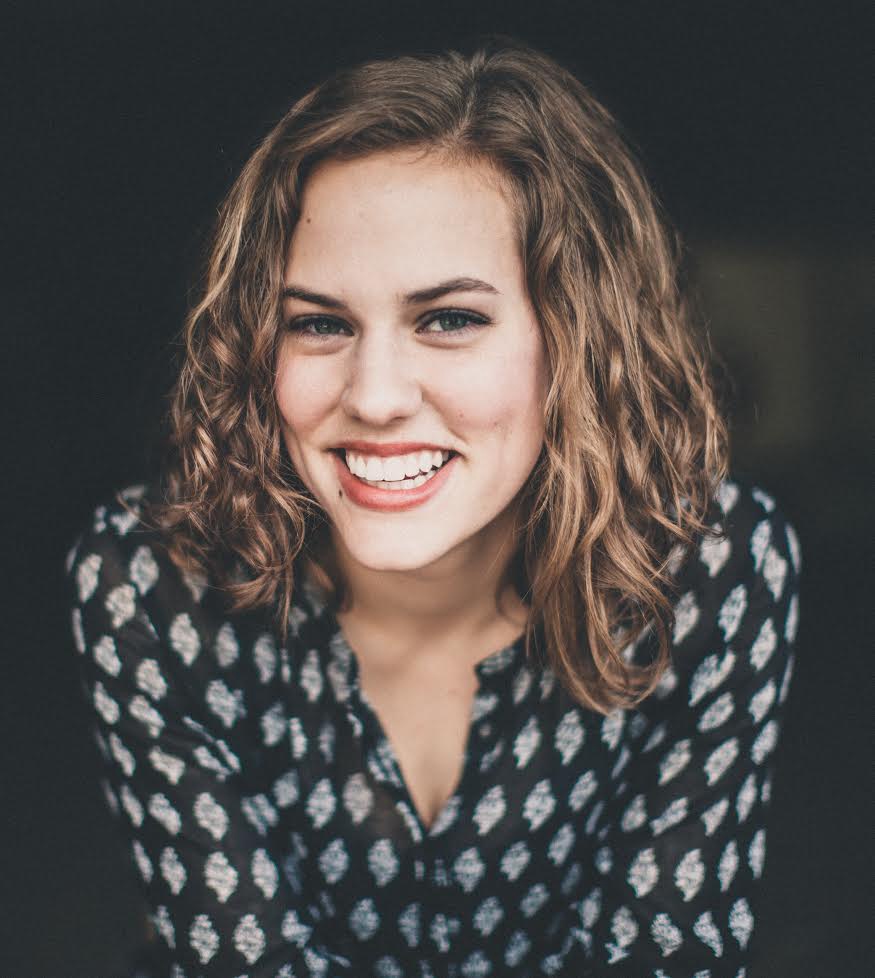 “What we are trying to do is bring people Downtown to let them fall in love with Downtown; then they can decide a new purpose for many of our buildings.”  — Beth Duke, Center City

A Conversation with Beth Duke

Beth Duke is the executive director of Center City, a nonprofit organization working to restore Amarillo’s historic downtown as part of the Texas Main Street and National Main Street movement. 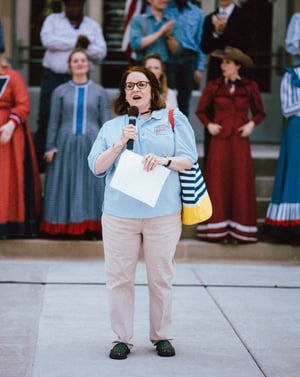 Center City is eager to remind our community that Amarillo has a very beautiful, historic Downtown — a Downtown worth saving. Through events, marketing and promotions, Center City draws people Downtown, attempting to establish it as a neighborhood where people live, work and play. The goal is to create a “Sense of Place.”

By focusing its efforts on community, social, aesthetic, and recreational interests in our historic Downtown, Center City is beginning to realize its vision of a revitalized neighborhood.

In a word, Beth Duke is passionate, a truth evident through the emotion in her eyes as she shares stories from Amarillo’s history. As she discusses Amarillo, its history and architecture, and the progress Center City has made, her enthusiasm is infectious.

To Beth Duke, every building has a story, so she fights for the buildings in Amarillo that cannot be replicated once they are destroyed. She values community. She only asks that we, as community members, slow down long enough to appreciate  Downtown.

Recently, the AEDC sat down with Beth Duke, to discuss Center City’s mission and investment in Amarillo:

Why is the work Center City is undertaking important?

“The work that Center City is doing is important because this is the oldest, most historic part of the city; and it has the best examples of architecture, particularly from the 1928 building boom. It has our most beautiful and ornate churches and it really gives our city a sense of style. A lot of people call Downtown ‘Amarillo’s living room,’ because it is our parlor. It is where we show off. When you see a picture of Amarillo, the iconic pictures are the skyline or maybe the neon signs down Polk street when we brought back the Paramount sign in 2006, because when you see those, you know it is Amarillo. If you see a strip mall or some other shopping area, that could really be in almost any city; but Downtown has its own personality and its own look dating back to our history and our city’s founders.

How has the Center City strategy evolved over the years as you have been executive director?

I have been executive director for 10 years. In those 10 years, we have really made the push to have more and more events downtown. We knew if we had events, people would begin to see the promise of downtown. With our events (parades, concerts, block parties), we have brought thousands of people Downtown. It pays off because people begin to see a vision of what some of these old buildings could be.

Why is Center City partnered with other businesses and organizations in the community?

One thing we know is we are a small membership organization and we can do so much more through partnerships. That is what we have been trying to do — whether it is our Downtown businesses that partner as members and sponsors or whether it is musicians who donate their time. Or, it may be another organization, where one of us may not be able to have an event, but if we partner together we can have a bigger event.

This is a job that really requires a heart for Amarillo. Where does your passion for our community originate?

I am a native married to a native. I came all the way through Amarillo public schools — Coronado, Austin, Tascosa, Amarillo College. I have lived here except for three years when I went to Baylor University. You know, I love my town, and I want to say I have always loved the historic architecture. I always believed that the architecture was worth saving. Even at my previous career with the newspaper, I did a lot with Preservation Amarillo. I just believe if we do not save it, it is gone forever. This job does take a passion for Downtown, for these old buildings and a passion for my entrepreneurs. That is how a downtown and a neighborhood is rebuilt — it is with passion of people.

What is your favorite aspect of Center City’s mission? 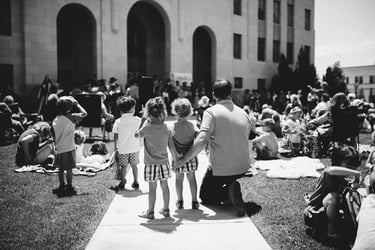 Well, I have two favorite parts really. First, High Noon on the Square, just seeing how many different people from all over Amarillo we bring together. Downtown is really central. Amarillo pretty much is organized like a series of concentric circles. And so the way our downtown developed, it is only about 8-12 minutes from anywhere in Amarillo. So I think my favorite part of this job is just seeing all the different people we bring together as we try to make Downtown everybody’s neighborhood.

My other joy is when we can save an old building, because you not only save that part of history; you keep it out of the landfill and you put it back on the tax rolls. You bring it back to life. And the times we are able to do that, it is a real economic victory.

What has been your greatest challenge in managing Center City?

I think our biggest challenge has been working with the community to realize that some of the bigger projects are truly a public-private partnership. There are many things private industry can do, and there are many things government can do. For many of our bigger projects, like the catalyst projects — the convention center hotel, the adjacent parking garage, and now the event venue — those took a public-private partnership because they have so many moving parts.

Can you recall one moment when you thought ‘this is why I am doing this?’

One of the most exciting things that we did, in 2006, we made an effort to bring back the Paramount sign. When the Paramount theatre closed, a collector had bought it and used it at one of his businesses for many years, but we believed it belonged back on Polk Street. We did  crowdfunding before crowdfunding was cool. We sold every bulb on that sign for $50, and were able to raise enough money to buy it, restore it and bring it back to its rightful place on Polk Street. At the time, we told everyone this is not the biggest thing we’ll ever do, but it will make a statement and it will make the most impact. When we had the ceremony at the Block Party in 2006, when we lit the Paramount sign, the police department, at the time, estimated that we had almost 20,000 people Downtown. We did the countdown. We lit the sign, and that was one of the most exciting moments. To me it symbolized that we were bringing Downtown back for everybody.

It was very cool. You know, it is an electronic sign. It spells out P-A-R-A-M, and then, this is the way it’s designed, it has a little gap before it finishes. So when it hit that little time delay, we all just held our breaths; then it spelled down. If you think about it, when a news station does their B-roll and shows Amarillo, what do they show?

What exciting project do you have in the pipeline, and how do you expect it to affect the Amarillo community?

Our big initiative right now, that is so exciting, is Center City is applying with the Texas Commission of the Arts to be designated as an official cultural district of the Texas Commission of the Arts. Right now, there are 26 cultural districts in Texas. Six are in Houston, but the closest one to us is Lubbock. We believe the Panhandle has fabulous arts, great creativity, and we are underrepresented as a cultural district, so we have made an application. Our deadline is coming up to turn that in and we will find out in September if we get the designation. We believe this is going to open up so many things. 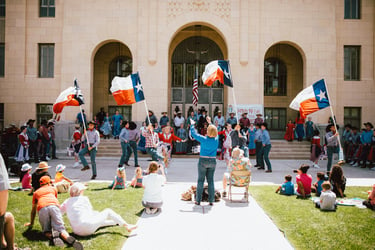 We are working very hard on this; we have raised money for this application, which includes a video and full documentation of our cultural inventory. As part of that, our next big project is a new art festival for Downtown called “Create!” That is going to be in August. It is going to be a family festival and we are just excited to bring artists and music and food Downtown in a creative atmosphere to remind people of our thriving cultural district. We think we have one; we just want the designation.

Our message to the Texas Commission of the Arts is that our impact is greater than you would even imagine and you can be surprised by the arts here.

Do you have a favorite story from the history of Amarillo?

Our Barfield building down here is at 6th and Polk. That is Route 66 and Polk. That is like the main street of the nation and the main street of Amarillo. If you look at the history of the Barfield building, it was built by Dora Oliver Eakle. Many times she went by initials, because in the ‘20s it was really difficult for a woman to do business in her own name. She built that skyscraper. At one point, she loaned the City of Amarillo money, because that was during the depression, to keep it going. There are so many great pioneer stories like that; you just do not hear of them.

You can find more information regarding Center City and its events at www.centercity.org. Currently, Center City is hosting High Noon on the Square every Wednesday at 11:45 a.m. -1 p.m. until August 10. High Noon is a catered picnic ($8.00 per plate or you can pack a lunch) with free entertainment.