An Interview With Laura Street, the Amarillo EDC's Newest Board Member

Laura Street is the newest board member of the Amarillo EDC. In February, the City Council selected Street to fill the empty board seat vacated when Ginger Nelson, who resigned to focus on her mayoral campaign.

Street currently works as a consultant, but has a deep history with the Amarillo community, local boards and area organizations. She is the chairwoman of the Panhandle Behavioral Health Alliance, a the founding executive director of the Globe-News Center for the Performing Arts, a past executive director of the Laura W. Bush Institute for Women’s Health at the Texas Tech Health Sciences Center, and a former president of the Board of Directors of the West Texas A&M Foundation.

In addition to her active and diverse involvement in the Amarillo community, Street has strong relationships throughout the state, which will greatly benefit the Amarillo EDC’s mission to grow the city’s economy.

Reagan Hales, the Amarillo EDC’s Director of Marketing and Communications, sat down with Street to discuss her new role.

Reagan Hales: This will be part of a new blog series with the Amarillo EDC.I thought we would start it with you as the newest board member. Tell me about your background, where you're from, where you grew up and how you got here in Amarillo.

Laura Street: Well, my younger years were spent in East Tennessee. My family moved to Oklahoma and I graduated from the University of Oklahoma with a degree in physical therapy and did that for about 12 years and then went back to school to be a nurse practitioner.

I met my husband (Joe Street) at the University of Oklahoma and we ended up in the — he ended up in the car business — and that's how we came to Amarillo. He bought the Toyota dealership here around 1984. And we were by ourselves and didn't have any family or friends here and decided we just wanted to see what was going on around Amarillo and that's how we got involved in the city itself. Neither one of us had ever been involved in anything in our community in Oklahoma City, but we quickly were taken in by the friendliness of the city and became involved in lots of different organizations and of course both of us will never leave at that point.

I finished my master's degree as a nurse practitioner and worked for a private physician and then worked at Texas Tech University Health Sciences Center as a nurse practitioner in the Department of Ob-Gyn. I became a faculty member in that department when I was working with the Founders Group on the performing arts center and they talked me into changing my career to become Executive Director and to form a new organization and build a performing arts center. Which I knew nothing about but, as my mother has always said, ‘You can do anything you want to do and learn anything you want to learn’. 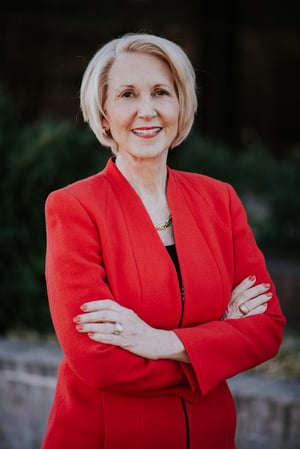 So I learned how to build a performing art center along with a lot of other people; it does take a team. And we raised $33 million and built the Globe-News Center For The Performing Arts. So I left medicine then and had to figure out how to be an executive director and raise money. Then I did an online certification to learn how to fundraise, and joined the professional organizations for fundraising and non-profit management and got those certificates and then I became — after we built the Globe-News Center — a non-profit consultant for five years.

Then Texas Tech called me to come in as the executive director of the Laura Bush Institute for Women's Health for three years to rearrange that organization, which I did. And then I retired from the paying job to do more community work. But I do continue to consult; I take a few contracts a year to continue to consult. Most of the things that I do they were with the community in volunteer work.

Hales: Where did that love for volunteering start from? When I grew up, I remember being 3,4,5 years-old and going with my mom to High Plains Baptist hospital. I had my little pink volunteer coat; the same uniform that all the volunteers at High Plains Baptist did. So I learned at a really, really young age how vital volunteering was to the organization. That’s such a part of you, so I was curious where you learned that from.

Street: You know, my parents were not volunteers; they were not philanthropists at all. I have just always had a penchant in my heart for giving. I think that's why I went into the medical field. Those of us who get into nursing, in particular, are givers and it's just in my nature.

I love helping people and I am truly an extrovert. My husband's an introvert so we are good together. We do take separate cars to events because of that personality difference, but we've learned to work so well together.

I just like being around people. People give me energy and I really enjoy knowing a community so well that I cannot put people together, but allow people to come together who have needs that are in alignment. That’s probably the best way to put it. Such as I find need somewhere in the community and then I may be involved in a conversation where somebody says, “You know, I’m interested in supporting a particular need,” and I have a match all of a sudden. And that really thrills me to think that I can create those kinds of relationships. So I'm all about relationships. I think the world runs around relationships and that's how we grow and progress. That gives me energy. So when I am feeling like there's not a lot going on or I'm down or I'm gloomy in some way, I go find people.

Hales: Well, gosh, that makes me want to ask you 10,000 questions but I’m going to try to keep to my script otherwise we'll be here for two hours! So you talked about your background and you've done initiatives in education in the arts and research, in a lot of different avenues of service, whether it be professional or through consulting or even just volunteer work. So now joining the Amarillo EDC is kind of a foray almost into a civic type of involvement that's different than what you've done in the past.

Street: It is different. I always said I would never want to be in politics and here I am in civic duty and I’ve enjoyed that! I’ve become involved with it in the last, I would say, few years, and I find myself enjoying that part of civic leadership.

You know God gave me the ability to lead. I don't follow very well and I'm taking that on, and this is one place that I can give to the community. I have learned to love this community so much. As Joe and I've said many times, we're not retiring anyplace else but here. We will continue to be part of this community in the leadership way until we can't anymore. But that's my purpose in life is to, I have a lot of the ability to do that and I’m going to use that ability; there's no reason for me not to.

Hales: There are so many boards and committees at the City level. What was it about the EDC that interested you so much?

We have a family-owned car business; we had a business in the WT Enterprise Center, Interactive 360, which was a start-up that didn't make it. So I have some background in business. I've always been fascinated with business but as far as the EDC is concerned, to me, it's one of those keys of growth and progress. It's more than business; it’s much more than business and that's what challenges me about it. We can bring so much together in this organization to create growth and revitalization in our city — that thrills me really. I mean it's understanding all of those pieces and how to put them together and how to bring all of the relationships together that we need to bring to create a lot of energy. And that's a great challenge. I love a good challenge and I've always thought this would be a great challenge.

It's interesting how – and I do believe in divine guidance – but it’s interesting how you sometimes have to wait until the dominoes line up well before you realize that it's the time, and I've been interested in the AEDC since I’ve been working on the Globe-News Center For The Performing Arts back in 2000,2001. I thought, ‘Well that's a very interesting organization and someday I'd like to be involved in that.’ It seems like the right time and it didn't seem like the right time before. I’ve always thought that someday I'd like to do that. Well, the time is now.

Hales: My last question, you said you're a born leader, or you think God created you to be a leader. What do you think makes you a good leader or what is that quality in leaders that you admire or look up to? What are some of those qualities that you think really defines great leadership?

Street: It took me a long time to figure out that I’m a servant leader. You know there are all different types of leaders in this world and it takes all of us; it's not just one type.

But I am a servant leader and it probably took me until I was in my late forties early fifties before I realized that. And I've done a lot of reading about leadership. I think it's just the fact that I love being able to serve others and I love seeing others do well and I like the fact that people.

You know, in consulting, the hardest thing for me to do is to sell myself. I’ll give myself away many times before I send a bill to somebody because I want to help that organization and I want to see them thrive and that's the servant in me and I think that is my kind of leadership. I'm working on a mental health initiative right now that we just turned into a Panhandle Mental Health Alliance and when I was asked to do that I said, ‘Wait, I'm the wrong person to do that. There's somebody else better than me.’ And I was told, ‘No, we can see you here. You can call anybody... I thought, ‘OK, I can do that,’ and that was two-and-a-half years ago. I just – it’s the servant leadership and I've recognized that, and once I recognized that it was, ‘OK. I’m in.’