Amarillo Offers Tourists And Residents Array Of Sights And Activities

The Amarillo community is brimming with generous volunteers, influential leaders and successful businesspeople. The people of Amarillo are what make our city unlike any other. With the AEDC guest blog posts, we hope to educate readers on our community as well as share valuable messages from Amarillo's key thinkers. This is a guest post by Dan Quandt, Vice President of the Amarillo Convention and Visitors Council for the Amarillo Chamber of Commerce.

So, say you have a product that has steadily increasing sales, now totaling over $870 million annually. This product is enjoyed by people of all ages and backgrounds, yet has easily defined specific niches that can really heighten the public’s desire to consume. In business, we call this a success story. In Texas, we call this Amarillo. 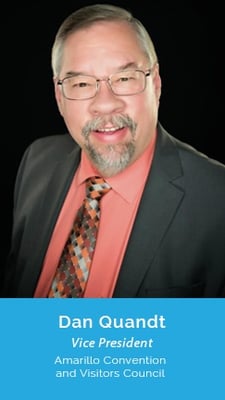 My professional and personal joy is having the opportunity to share this area with the rest of the world. Your only exposure to Amarillo may be the famous “Amarillo by Morning” song. Trust me, I have learned Amarillo is great anytime of the day.

Let me get back to that $870 million dollar number. This is the amount of directing spending the traveling public did in Amarillo in 2014. Now, put this into perspective. I moved to Amarillo from the resort community of South Padre Island, Texas, the most tourism dependent city in the Lone Star State.

The direct spending by tourists on South Padre Island was less than half of what the travelers spent in Amarillo. Yup, this old cow town of 200,000 is definitely in the tourism business.

Part of this starts with location. Amarillo is the midpoint between the Dallas-Ft. Worth Metroplex and Denver. It also sits perfectly between Oklahoma City and Albuquerque, New Mexico.

For years, Amarillo mostly served as this midpoint, a spot to refresh and refuel. Then, as the community and the wide open prairie revealed its secrets, this capital of the Texas Panhandle became one of the top tourism areas in the Lone Star State.

First is the area itself. For people living in the concrete canyons of a metropolitan area, the openness of the Texas Panhandle is amazing and overwhelming. The area directly around Amarillo seems very flat; however, travel just a short distance in almost any direction and the landscape adjusts to decorative crevices, rolling hills and silent mesas.

And then, just a half hour southeast of downtown Amarillo, the land opens up revealing a true natural wonder, Palo Duro Canyon. The full canyon, over 120 miles long, is the second largest in the nation.

The main difference between this one and its larger sister in Arizona is that this canyon provides a road that lets you drive all the way down to the floor of the canyon. No wonder Fodor’s rates the Palo Duro State Park as one of the top 10 state parks in the nation. Once on the floor, just the drive along the winding trail admiring the view, totally unlike the road you were on over 800 feet higher.

Driving down that slope into Palo Duro is absolutely one of my favorite things about living in this area. It is so vast and beautiful, it takes your breath away every time. Once you are on the canyon floor, there are around 40 different trails to hike or bike. I’ve gone on the Lighthouse Trail that ends up at the base of a true Texas icon, the Lighthouse formation. It’s not really visible from the driving route, however going to the canyon and not getting a glimpse of the Lighthouse is kind of like skipping Old Faithful as you explore Yellowstone National Park. It’s great, but the main attraction is still missing.

Now, I’m no athlete, so one of my favorite things in the canyon is actually sitting in the summer watching the outdoor musical “TEXAS” in the Pioneer Amphitheater. Only performed in the summer, “TEXAS” tells the history of our area in colorful song and dance, including a memorable patriotic finale.

And that’s just Palo Duro Canyon! Within the Amarillo loop, we have a tremendous variety of options. Nostalgia lovers, like me, remember the old TV series “Route 66”, based on the adventures of two guys along the Mother Road. Well, the actual Route 66 comes through Amarillo. Our historic district is lined with restaurants, coffee shops, antique stores, art galleries and so much more.

Again, this is just the tip. Throw in a very vibrant arts community, including resident companies in symphony, ballet and opera. Combine this with attractions that collect people rather than dust, three professional sports teams along with many other diversions and you have a tremendous place to live and visit.

I learned to look beyond our endless skies to find amazing things. If It sounds like I’m bragging… you’re right. In other parts of the nation, bragging is considered wrong. In Texas, it’s an art form. Stop by and join me and see what all the talk is about here in the high plains of Texas!

Dan Quandt is the Vice President of the Amarillo Convention and Visitors Council for the Amarillo Chamber of Commerce. He is a 34-year CVB director veteran.